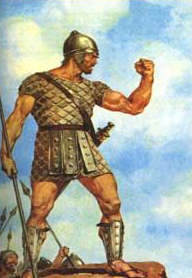 Goliath was a giant; the Bible does prove this.

But how was Goliath a giant?

The Bible does say that all the Giants were destroyed at the time of Noah, then how can goliath be a giant. This is the only question that confuses most of the People.

What are Giants in the Bible?

Signs for giants in Bible

And the bible also says that Giants have six fingers on each hand and six on each foot. Totally they can have 24 fingers. Normally humans have twenty fingers, five each hands-on and five each on each foot. We can see the proof in the bible from the verse (1 Chronicles 20:6) (2 Samuel 21:19).

Flood occurred at the Time of Noah

According to the bible, everything was destroyed even all the giants, Then how can the Giants be again found on the earth?

As we all know Noah and his family were saved, the only people left to flood. Then again how can Giants be found again on the earth at the time of David?

Do the Sons of God again come to the daughter of man again?

No, but scholars say may be Noah‘s wife or any daughter in laws of Noah’s can be from the descends of giants and according to the process of DNA. The genes of the parents are passed from the ancestors to their new generations. By this process, there would have been thousands of giants at that time, and Goliath was one of them. We can see in (Numbers 13:33) Bible does prove this. And there so many verses related to this.